Airius Fan Systems have been to provide Basketball Court Cooling in sports facilities all around the world, from the local club to 20,000 seat stadiums. Airius Fans can provide strong air movement for summer cooling. As the Airius fans push air over the human bodies playing or viewing the sport evaporative cooling is provided at an individual level. Further to this Airius can be used for destratifying spaces in cold winter months to save up to 40% on heating bills.

With our G400EC units now being used in indoor sports stadiums around Australia, contact Airius for a facility you can view to see how well our units perform in ceiling heights 8-15m in height. Unlike oversized paddle fans which are typically installed behind cages in athletics facilities (often costing more than the unit itself!), Airius units do not need separate protective elements to prevent damage from sports equipment. Their smaller profile, without exposed fan blades, sturdy construction, and safety anchor point attached to the fan motor ensure that a wayward soccer ball or basketball poses no risk to the unit or the players underneath.

Additionally, the use of the unobtrusive Airius Air Pears in sports and basketball court cooling applications means:-

In addition to lowering energy costs and increasing safety and comfort of the athletics facility, Airius fans can be optionally fitted with a PHI unit to mitigate odours or mould and kill bacteria in locker rooms, potentially preventing the transmission of athlete’s foot and other contact and airborne infections. 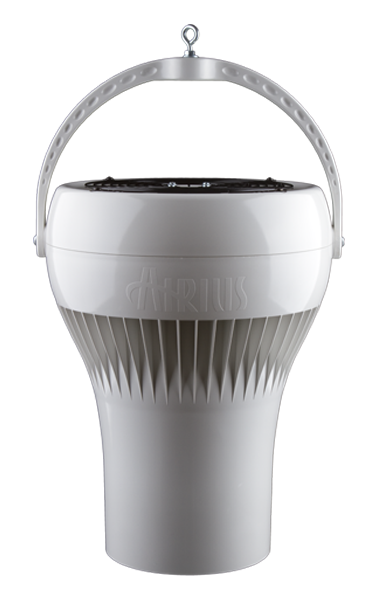 “I thought I would email you to give you some feedback on the Airius Air Pear fans we installed in our Centenary Sports Hall in December 2014. We installed 8 x Model 60-PS4 Airius Air Pear fans to the ceiling of our Centenary Sports Hall. The hall has a problem with very little cross ventilation available due to it being built underground and has a synthetic basketball court as its roof so the sports hall heats up in the summer months.

The installation of the fans was straight forward and our contracted electrician took two days to fully install the air pear system with two controllers. The air pear system has been in operation for six months now. We are more than happy with the results. The space is a lot more usable in the hotter summer months. We have received great feedback from both the school PE department and also external hirers. High intensity sport is played in the gym now with a lot more comfort.

We have the ability to set the fans on five settings ranging from 20%, 40%, 60%, 80% or 100% capacity. It is rare we turn the fans to 100% even though they are 8.5 meters off the playing surface. To put it into context the gymnastic training group can only have the fans on a setting of 3 out of 5 (60%) because it affects the throwing of the ribbon in the air.

The fans are quiet and move the air around the hall with ease. We have found in the last month we can use the fans to circulate the warmer air at the ceiling height of the hall to the playing surface level to cut down on the need for winter heating. I have received our power consumption invoices for the gym and the fans have made very little to no difference to the running cost of the gym. We leave the fans on overnight to help cool the room for the next day.

We are extremely happy with the performance and comfort we receive since installing these air pear fans and would happily recommend them to other people needing to circulate air and increase thermal comfort. Thanks again for all your professional service and follow up received.”

“I spoke to the high school PE teacher (major user of the stadium) & they are finding the AirPears really good, especially in summer!”

“FYI, The destrat fans installed over the summer have had a huge; positive impact in terms of comfort. We have monitored this over several months and find them to be money well spent. Our ambient temperature is steady 68°-70° throughout gymnasium. We no longer make adjustments on a regular basis. The space is untouched and comfortable. Job well done.”

“Saint Stephen’s College is a co-educational, Preparatory to Year 12 independent school at the Gold Coast in Queensland. We have a large multipurpose sports centre housing 2 basketball courts. The floor area of the hall is around 1300 square metres and the roof is approximately 9 -10 metres high. This space is used for Physical Education, basketball games, exams and school assemblies.

On hot days, the auditorium air was still, lacked air flow throughout the space and created issues for all those participating in physical education classes and sporting activities in the building.

We considered using large fans to solve this problem. However, we decided to use Airius Air Pear Model 60 PS4 units for their perceived effectiveness, appearance and competitive pricing. 12 of the Air Pears were installed, equally spaced around the hall with two speed controllers.

The units were suspended off the roof structure and were easy and quick to install.

The Airius Air Pears fans have proved to be effective and do not dominate the space but fit easily into the hall; they are almost not noticeable whilst moving the air around the hall, creating air flow on hot, still days making the hall more comfortable to teach and learn in.”

“The difference has been immediate and profound…you can really feel the air movement under the fans, despite the fact that they are 30 feet above you. My students are delighted.”

“I would like to compliment your company on a fine product, the Thermal Equalizer. We use these fans for an indoor Rock Climbing Gym application in a 6,000 sq. ft warehouse with 30 foot ceilings. Rock Climbing Gyms present a unique challenge for ventilation and air circulation, because climbers at the top of the wall are hot from exerting themselves, and their partners on the ground are cold while standing still. Therefore we must reverse the natural temperature gradient in the space.

The AIRIUS Thermal Equalizer is perfect in this application for several reasons. First, they are strong fans which really move the warm air down to floor level. Second the fans are quiet, we use eight fans and you can barely hear them while running. Third, because of their compact size we can put them close to the climbing wall without the risk of a climber being struck by a moving fan blade. Fourth, they are energy efficient, and we save on air conditioning costs. Last but not least, they look nice!”