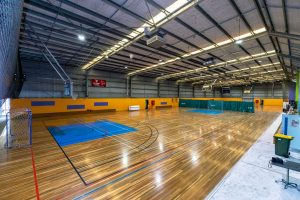 Warwick YMCA is located in the very hot southwestern QLD. The facility caters for a range of sports from basketball, volleyball, futsal and gymnastics.

There are two basketball courts and large surrounds. They had an overheating problem and approached Airius to come up with a cost-effective problem free cooling solution. Airius suggested and installed 8 x G400 EC fans across the facility. YMCA Warwick located in southwest QLD and provides a facility for a range of indoor sports. Their facility covers two basketball courts and surrounds and is 10 metres high and approximately 1,100 sq. metres in overall size. It is used by both the YMCA and assorted associations and groups for a range of sports.

YMCA had considered the use of large bladed fans however the Airius option offered the best price without the expense of running three phase power or relocating the lighting. Plus, the client was concerned at the damage balls etc. can make to large bladed fans, as well as the required annual maintenance costs HVLS large bladed fans require.

“They were very easy to install and won’t have the same maintenance nor programming issues as the bigger versions which wouldn’t have coped with the futsal balls bouncing off the rotating blades!”

As assorted other YMCA facilities around Australia use Airius fans for cooling, David Jordan, the facility manager, approached Airius for a cooling solution in his facility.

After a review of the supplied floor plans and photos, Airius recommended the installation of 8 x Airius Sapphire Series G400/EC fans, suspended just off the ceiling and evenly spaced around the facility , with 2 Airius NP-01 non-powered Potentiometer variable speed controllers.

These fans work together as a system and push out massive volumes of air. They have a thrust rating of 14.32 Newtons and a C/L velocity at 10 metres of 2.89 m/s.

YMCA accepted the Airius proposal adding to the scores of facilities around Australasia and Asia now using the Airius G400 EC fans for cooling their large spaces. Their ease of install install, and unobtrusiveness, coupled with all their other benefits (compared to every alternative fan type) made the decision easy.

The German EBM Papst EC motor (regarded as the world’s best fan motors) which powers the fans, is controlled by either a BMS or by an infinite speed potentiometer controller. Airius supplied two of these controllers -one per four fans per court.

As can be seen by the included client testimonials, they are extremely happy with the result. David Jordan, Facility Manager from YMCA, said …

“Airius fans in our stadium have made a massive difference to the air flow, comfort levels and PR at the Warwick Indoor Recreation and Aquatic Centre (WIRAC).”

Wow what a difference some fans make in our two-court stadium. It is quite remarkable the way the Airius fans work as a ‘system’ and create a more pleasant environment for our wide range of users in our Centre.