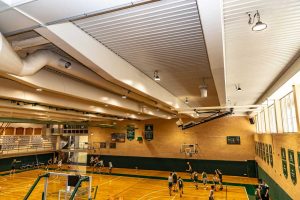 School Sports Hall Cooling: Trinity Grammar is a leading private boys school located at Ashfield in Western Sydney. They have a Sports Hall built in 1989 that suffered from severe overheating in summer. The hall also contained an unusual roof structure that limited the options for cooling solutions especially large bladed fans.

Trinity approached Airius to design a solution that offered cooling air movement in both the large sports hall as well as the upper level bleachers. Airius provided a successful solution for both applications. 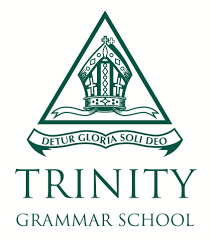 The Airius fans are obscure, small and compact and made a massive difference to their boys in their play in these hot conditions.

The Airius fans are a great cheap option in regard to energy and price. The biggest issue we had was the lack of air movement and what the Airius fans have done is move the air around and the difference they have made has been incredible. The boys are now more productive in their sports and participation rates have increased in PE because it isn’t extremely hot in the hall.

The hall contains two basketball courts and as well as rows of upper level bleachers.

Trinity had considered air conditioning but the extremely high purchase and running cost was out of reach. Then they considered large bladed fans but found them too imposing and also very expensive. The layout of the roof structure also meant that large bladed HVLS fans would have to project significantly down into the playing area, creating a range of other issues.

After hearing about the efficacy and simplicity of the Airius fan solution, the school’s Facility Manager, Ben Morrisey, contacted Airius to provide a simple cooling solution.

He advised that ‘the heat in the gym was very unbearable in summer for students PE, volleyball, basketball and the other indoor sports we play.’  They really wanted air movement and the cooling effect that will bring.

The building is approximately 9.5 metres high and is around 1,000 sq. metres in size. On the upper floor five rows of bleachers are located to look down upon the courts. The school received regular complaints from the viewers seated on the bleachers, that is was also overly warm and uncomfortable up there too.

This install took place in June 2018 and right across the extremely hot 2018-19 summer period, the school found the Airius Air Pears very effective in providing air movement and the related cooling impact that brings.

Airius also supplied a range of low heat and highly efficient LED lights which were installed at the same time as the Airius fans, reducing the client’s install costs and significantly improving the lighting across the whole space. The lights also attracted a worthwhile rebate for energy savings from the government ESCII scheme.

The School installed 8 x Airius model 60 EC fans in the sports hall, suspended off the roof, (controlled by two Airius potentiometer speed controllers) hidden away above the roof beams and 5 x Airius 20EC Eyeball fans (controlled by one Airius potentiometer speed controller) laterally located above the bleachers to push the air along the seating zone.

Ben advised after the install he found ‘the Airius fans obscure, small and compact and made a massive difference to their boys in their play in these hot conditions.’

Which is why we would like to offer you a FREE / NO OBLIGATION Design Consultation where we can match our products to your needs and budget.  Save your time trying to figure out what you need and book your consultation today.